So, in 2016, while I was taking care of my grandmother, I missed the (multiple) e-mails from my hosting provider warning me that my credit card on file had expired and my hosting wouldn’t be able to auto-renew. When I did realize it, finally, my website was long, long gone. To add insult to injury, apparently I’d moved my backup folder in Dropbox and neglected to update the backup path, so none of it was backing up. It sends an e-mail every time it attempts a backup, but you have to actually read the e-mail to know whether it succeeded or failed. I hadn’t been reading the e-mails.

I couldn’t find any of my own backup files, including all the graphics I’d made for the site. I always back up every iteration of a graphic when I’m making it. But all the graphics for this site? Gone. I have no idea how that happened.

Apparently, the Universe decided I needed a brand new website.

This Patreon image was the only image I’d created that I could find. 🙁

But I was so dejected from discovering this news (and also exhausted, as being a caregiver is hard), I just put it off for… well, over a year. I just couldn’t bring myself to face doing it all over again.

Obviously, I pulled myself out of that particular funk and here we are! The website looks similar, but has no pretty graphics yet. I’m going to be meeting with my graphic designer about a re-brand and having her make me some cool graphics for the site.

Caly’s Game was originally published by Loose Id. LI announced early this month that they are closing their doors at the end of the year, after 13 years in the business. (Note: this is what Amazon is doing to small publishers.) What this means is that the rights for Caly’s Game will revert back to me and I will be self-publishing it. I’d planned to do it in January, but it looks like LI will be cutting it loose in March instead. 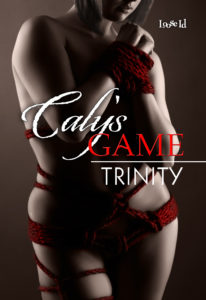 Between now and then, I will be writing a couple very short, kinky scenes to complement the world I began building with Caly’s Game and delve into much more deeply with the follow up, Miriam’s Collar. Originally, I was going to re-publish Caly’s Game in January with Miriam’s Collar to publish in March. But now with CG not coming back to me til March, I have to decide whether I want to publish them both around the same time, or space them out a bit.

Yep, you read it right. There’s a second book. All of these books take place in a fictitious community built around a dungeon called The Sanctum. The kinky  stand alone scenes will be released as Sanctum Shorts and will be available for cheap on Amazon and also as freebies for my mailing list sign up. Regardless of the publishing schedule for CG and MC, I’ll be releasing the shorts likely in January and in February. I’m really excited about all this!

So that’s what’s happening on the book front.

Over the coming months, I’ll be populating the blog with real-time posts, but also many posts that were originally published on Fetlife. I wrote some cool stuff over there, so it seems a waste not to bring it here. As I write new posts there, I’ll crosspost here, so they’re released at the same time.

I’ve got something really cool in the works for fans of my work, so please stay tuned! 🙂