This is the third post of a small group that all go together (I promise we’re almost done!). If you haven’t read from the beginning, the first post is You Can’t Say No to the Universe. It will make much more sense if you read it from the beginning. Subsequent posts are linked to their predecessors and next posts, so they’re easily followed. 🙂

Southwest Leather Conference is, as you might imagine, a Leather event. I have a …varied history with Leather. When I came up in the mid-late 90s, I was what I’d term Leather-adjacent. I was a witness to Leather. The scene in Atlanta was very different then. The Pansexual community and Gay Leather scene were independent of each other, but overlapped often as each community welcomed those of the other community. I’m sure there were the occasional clashes, but overall, it felt inclusive, at least to me. Each group had their own spaces, but everyone was welcome at all.

As I learned about Leather, I became more and more drawn to it. I would ask people to tell me their stories (I sorely wish I’d written it all down). I remember hearing naughty and hot stories from GrandMaster Puckett (RIP) — a dirty, old gay Leatherman of the finest variety.

I sat on the concrete patio of the new PEP house (now 1763) at the feet of Jeremiah (RIP) as he laced up his shiny knee-high boots over his flight suit. He explained why he was lacing them as he was tonight, and I learned about how which side you did things on communicated to others on which side of the slash you wanted to play that evening.

I watched Master Doug and boy bob (RIP) interact as they ran Sanctuary of a Dark Angel, the other local dungeon space. Doug and bob were the first real life m/s couple I’d ever gotten a chance to interact with and they created the entire foundation on which I built my understanding of master/slave dynamics. They were amazing.

They were all amazing.

I loved what I saw represented as Leather. I loved the integrity, honesty, honor, ferocity with which these people seemed to live their lives. I admired the courage they had to create their own paths to their own happiness. Over time, I eventually adopted the Leather label for myself, because it grabbed my heart so deeply. I aspired to be like them. 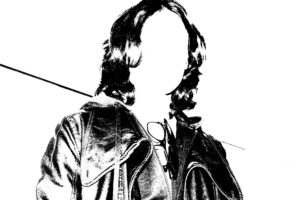 I had never been in a Leather relationship. I had never even been active in the Leather community (believe it or not, I was much too timid to jump into it). But it resonated. It felt right. It felt like me. Like it could be me.

I carried the label in my heart for over a decade.

There was a time in more recent years that I dropped the Leather label, mainly because there were a lot of people — loud, vocal people — who had taken the label who absolutely do not represent what I understand Leather to be. So for the last, about five or six years, I have not used the Leather label to identify myself. I hadn’t changed. It felt as if the label had changed and I didn’t like what it now signified.

In 2017, I started toying with the idea of reclaiming that label. Many of the people with whom I had issue have faded away. Some are still here; don’t think they’re all gone. And I don’t consider those people Leather at all, though they like to very loudly proclaim how Leather they are, as if they are trying to convince people of their legitimacy (protip: this is how you know someone isn’t Leather).

But more people had come to Leather, both locally and in nearby cities, who I felt did try to live in a way that I associate with the Leatherfolk of my past. And so it seemed as if the Leather label had come back around, for the most part, to what it had been, to what I had been attracted to. To what I had adopted as my own. And so I began to tentatively embrace the label again.

I’d brought my vest to SWLC. I’d put all my pins on it before I left Atlanta. And it hung in the closet in my hotel room. I felt self conscious about putting it on when I was surrounded by so many people who had been active in their Leather communities, who had the integrated, involved history that I did not. So many people who hadn’t been just witnesses. Who hadn’t just carried the Leather label in their hearts, but lived it loud and proud. I was intimidated.

It’s a strange feeling to have, identifying as a thing but not being sure as to whether people will see you as worthy of it.

To be clear, I knew I would put on my vest. I knew I would embrace the Leather label again (I’d already started that part) and I knew I would do it in a more immersive way than the past. And because it was SWLC, I knew the Universe would let me know when it was time. So I was not stressing about it at all.

Time turned out to be Saturday evening. There wasn’t any big epiphany. I didn’t get a giant thumbs up from the Universe. I just went back to my room and put the vest on.

As you’d expect if you’ve spent any time with Leatherfolk, not a single person batted an eye. No one even questioned whether I had the right (or the history) to wear the vest. As with most times I’ve felt intimidated in the past, it was all in my head. I’d known it was. It still takes some effort to overcome, even when you know. 🙂

So while I’m still not part of any official Leather family or organization, I am getting back to being comfortable wearing the label again.

2 Comments on SWLC Post, The Third: Leather Is As Leather Does